We arrived in Vang Vieng mid-afternoon on the first day of Laos New Year. It was a great experience driving through town, trying not to get all our luggage soaked before getting to the hotel. We found an amazing place just on the other side of the Namson Bridge, right on the edge of the river. Pasanchai Bungalows has some of the best food we ate in Vang Vieng, a great little place to chill-out by the edge of the river, and a good room. What more could you ask for for  $21 (USD) per night. Because you have to pay a toll to use the bridge, we only used it when first arriving at the hotel, but otherwise used the free bamboo bridge next to it whenever we walked places. I did get a little bit annoyed that they regularly let locals cross the bridge for free in the evenings, but still wanted to charge the foreigners. When I asked about it, they said that the local guy was returning to the other side and his ticket is good for two-ways. A pretty shitty lie in my opinion since there is only a toll on one side of the bridge and the local boys never even slowed down on their motorbikes to show a ticket. Anyway, it wasn’t a big deal, just something to be aware of.

Vang Vieng is no longer the drink and drug induced party mecca that it once was. After official numbers came out in 2012 that 27 people had died the previous year, the government tore down many of the bars that lined the river, and cracked-down on bars selling drugs. Since that time, Vang Vieng has worked really hard to re-brand itself as an outdoor adventure destination. Tubing is still possible, but there are now only a few bars to stop at for drinks, and it’s a relaxing way to spend the day, rather than a means of getting absolutely f’ing wrecked. Drugs are also still an option, as weed, shrooms, and opium were available in several establishments we ate at. The proprietors just hand the clients a special menu to peruse.

My wife and I began our first full day in Vang Vieng with some early morning hikes up a couple of hills to some excellent viewpoints. The first was Pha Ngern Viewpoint, which took about an hour including rests. Make sure you bring water as it is brutally hot, and there is no guarantee the little canteen at the top of the hill will be open when you get there. The views of the limestone mountains in every direction is breathtaking. After descending, we decided to hike up to the Nam Xay Viewpoint, as we heard the views are even better and there is also a motorbike up there that you can use to pose for pictures. This hike only took about 25 minutes, but as it was situated further away from town, it had an even better 360 degree view. 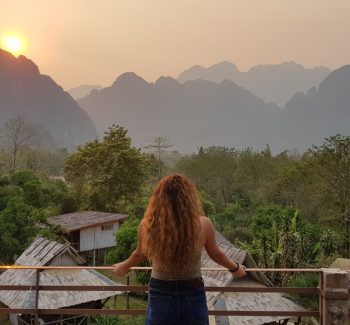 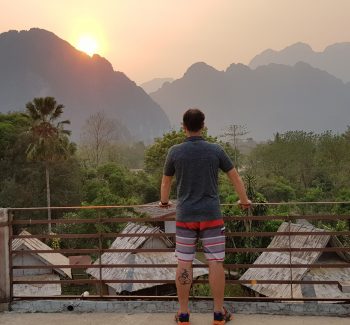 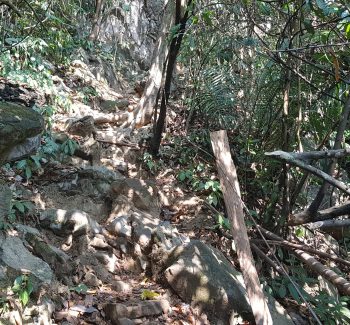 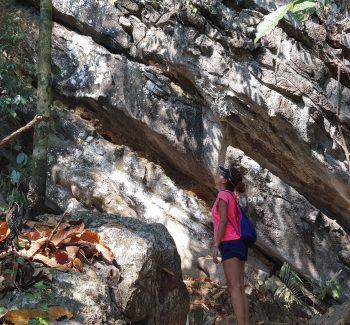 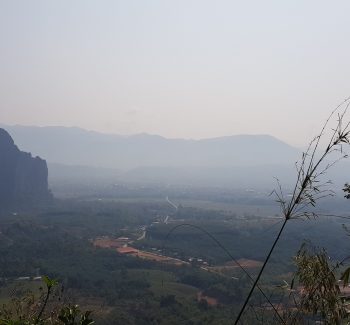 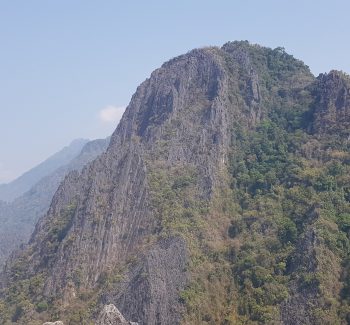 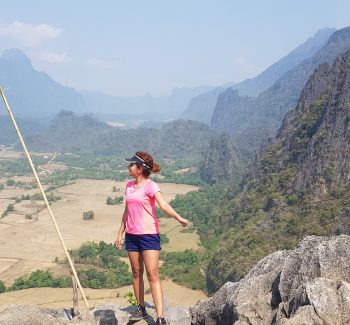 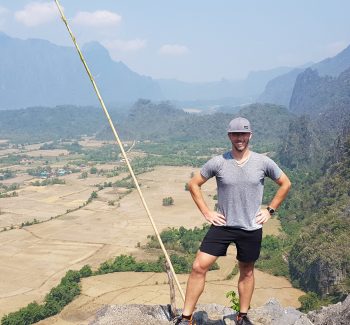 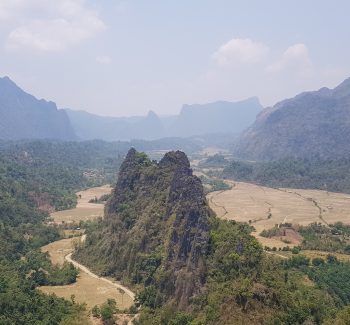 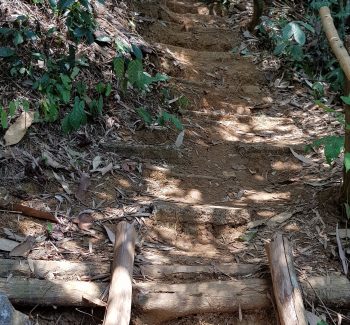 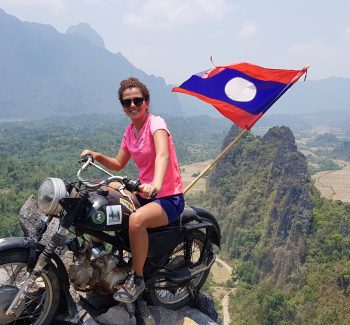 After descending Nam Xay we stopped at Blue Lagoon 1, which is the most touristy of the lagoons. We decided not to go in, as there must have been over a hundred vehicles parked in the are, and instead decided to go have lunch at our hotel. The motorbike ride to Blue Lagoon 2 took nearly an hour down a gravel road full of potholes. It was the least touristy of the lagoons, with nearly everyone there being local Lao people. The water wasn’t great. It was quite warm, which tells me that it’s not fresh spring-fed. After about 30 minutes, we decided to head up to Blue Lagoon 3, which was around 15 minutes further away. There were quite a few tourists and locals, but it was by no means busy. The water was spring-fed, and only about 20 degrees. Perfect temperature to survive the nearly 40 degree outside temperature. Nearby there is a water cave that can be explored, and a viewpoint up on the edge of the mountain. As it was getting near sunset, we decided not to go into the cave, but to just check out the viewpoint. Getting up to it required a bit of a scramble up some ladders and through a cave, but it was worth it and very cool.

The next day we drove to the Kaeng Nyui Waterfalls, which takes about 30 minutes to get to, and a 10 minute hike through the woods. Due to it being dry season, the waterfall wasn’t that spectacular, but it was still nice and refreshing. There was a smaller waterfall lower down with a nice pool that could be swam in. The best part was that there was no one else there and we had it all to ourselves. In the afternoon we tried to go ziplining, but after driving to the water cave, 17km out of town, it turned out that the guides had decided to close early. Instead we walked to Smile Beach Bar which is on a little island on the Nam Song River, lounged in a private gazebo, and had some beers during sunset. We also had a little swim in the slow flowing water of the river. Perfect way to end the day.

We ended our days in Vang Vieng with an early morning excursion to the Jang Cave, which was only a few km from our hotel. Getting to the cave involved paying another bridge crossing fee, paying to enter the cave, and climbing 147 steps. This is the perfect cave for someone who is a bit apprehensive of dark tight places. This cave has a paved walkway throughout and is lit-up, which is a good thing, as the cave is quite big and the lights allow you to really take it all in.

After going to Jang Cave, we went back to the hotel to collect our bags and drive up to Luang Prabang. 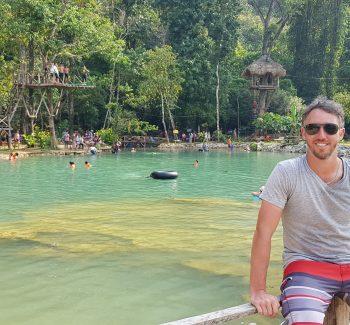 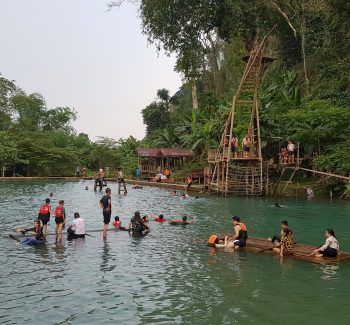 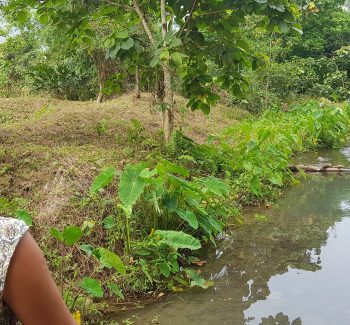 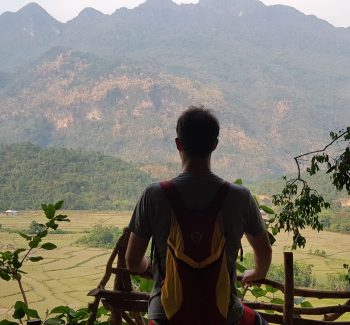 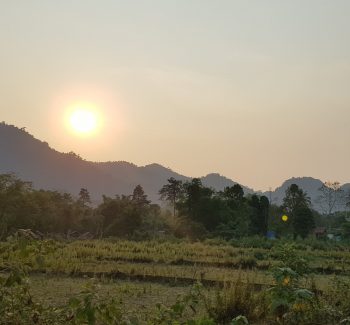 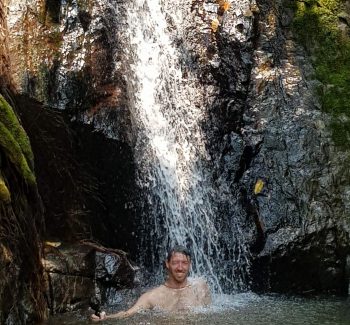 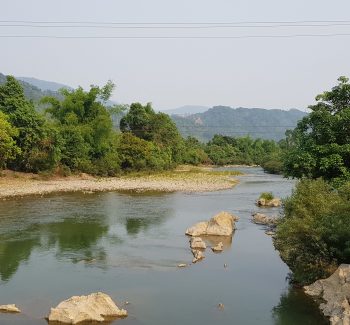 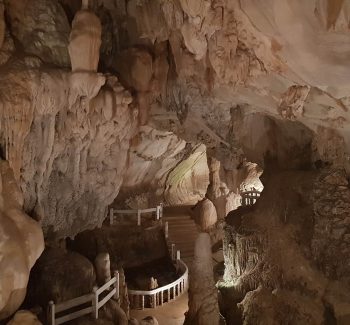 To watch the the video of our stay in Vientiane, Laos, click HERE

To see Sima and I celebrating Songkran, click HERE

To watch the video of our time in Vang Vieng, Laos, click HERE

To watch the video of our time in Luang Prabang, Laos, click HERE (coming soon)