A guy quit his job to cycle around the world and has shared details of his amazing journey. Ian Finlay has pedalled 29,000km and visited 29 countries, travelling more than halfway around the equator. Once the planet is open for business again, Ian will make his way back home to complete a full circumnavigation.

The keen cyclist from Cumbria, England set aside three years to see the planet and try new things along the way. Over the last 18 months the 53-year-old has ridden from his UK home to New Zealand by the classic Silk Road route.

Ian has shared the roads with many cyclists along the way and although they have all since moved on, they continue to follow each others’ onwards journeys all over the world.

“Australia from Cairns has proved to be a physical challenge, with big distances between towns in a heatwave and drought on top of the usual summer sunshine. The beaches, though, are so beautiful and numerous. I’ve had the opportunity to scuba dive on the Great Barrier Reef, take a light plane over Heart Reef and fly in a stunt plan over Airlie Beach. I’ve got to meet some beautiful people, including homestays with three who’d been following my journey for over a year.”
Ian Finlay 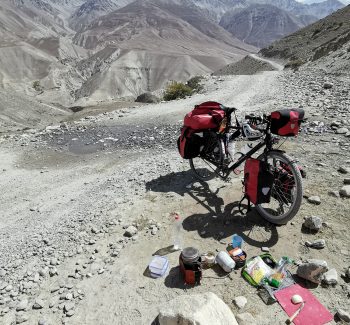 Earlier, Ian travelled through Tajikistan, which borders Afghanistan, to ride through the Bartang and Wakhan Valleys. He said this was the most ambitious part of the whole trip; one he feared the most but also enjoyed the most.

It took 10 days to cycle through the Wakhan Valley. The challenges and experiences through that valley have changed me. So many fears, values, preconceptions, beliefs and aspirations dealt with in such a short time.
Ian Finlay

Ian has also discovered a love of writing during his trip and already has more than enough material to write a book about his experience when he gets home. His journey will continue on to China, South Korea, Japan, South America, Canada, North America and Southern Europe.