Kediri as a nice little city. I managed to go to a festival that happened to be going on and saw a traditional Javanese puppet show, ate some great local food and just enjoyed the moment. I decided to head to Malang the next day. On the way out of town, I happened upon some traditional dancing and a parade. The costumes and masks were quite impressive and from what I gathered, all emotion has to be shown through body language, since the dancer’s face is covered by a mask.As far a riding goes, this was a depressing ride, as I was constantly going up and down, and knew full-well that Malang is situated way up in the mountains, so every time I finished a climb and started descending again, I knew I would have to go uphill again.To make matters worse, it started to rain at the 40km mark and didn’t stop for the rest of the ride. I had no choice but to press on as I wanted to reach Malang before night-fall.I also realized that you should never ask an Indonesian about distances because they have to idea. I asked one guy at a gas station when I was near Wilingi how far to Malang and he said 85km….it was 55km away (good news). I was so wet that I didn’t want to check my phone’s gps as I didn’t want to damage it. When I reached the top of the damn, I asked another guy how far to Malang, and he told me I only had 15km left to go. Great! So I pushed it and tried to get a real good ride in. After 15km I saw a sing that said I still had 15km to go. I was so annoyed. The day progressed from people looking at me riding, smiling and saying ‘hello mister’, to people looking at me completely drenched and laughing.The joke was on them. My ride was nice and cool (tad bit wet), I had an amazing hill climbing session on my mtb with 20kg of luggage, and I reached Malang just as the sun was going down. I checked into my hotel, washed my bike, myself, my clothes, and had some amazing Chinese food. I was asleep by 9pm.

Malang
Although getting to Malang was quite difficult, especially considering the weather, the city itself was a good place to take a break. Although I only intended to stay for 3 or 4 nights and then carrying on to Mt. Bromo, on the advice of local couchsurfers I decided to rent a motorbike for the trip to Bromo and leave my excess baggage at the hotel. All in all, I spent 8 nights in Malang (including Bromo).

Knowing that I would arrive in Malang near the end of the day and after a long 120+ km ride, I pre-booked my hotel room for 1 night. Although the place was nice, and the staff were great, it was so noisy in the morning that I couldn’t fall back to sleep after the morning prayers, because everyone was sitting in the hallway talking on their phones . While out looking for a new hotel, I came upon a cycling event with over 1000 cyclists. Unfortunately it was almost over, but that didn’t stop some guy from dragging me up onto the stage to tell everyone about my trip. I got a free super-sweet ice tea for the effort.After checking into my new hotel, I met up with a local couchsurfer (Karnia) and the two of us went to the town of Batu (rocks) up in the mountains, to go to the zoo and a waterfall. Only interesting thing to tell about this day was my accidental electrocution by touching the safety wires of the Hyena pen while trying to get a picture. I can’t really describe how much it hurt other than to say it felt like I got punched full force in the stomach. Luckily I didn’t drop my camera.While in Malang, I decided to organize a karaoke night and we ended up having 8 people show up. It worked out quite well as most of the people didn’t know each other yet. We rocked out for 2 hours and then went to a coffee house till midnight. I really met some great couchsurfers during these 8 days. Notably, Karnia, my travel buddy on my second day. Pray, my coffee drinking/football watching friend whom I met up with in Bali while he was on a short 5 day trip. Yekti, one of the cool karaoke girls, and Fanela, my party buddy and hot springs partner before leaving. 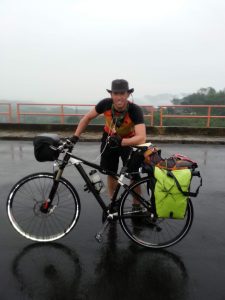 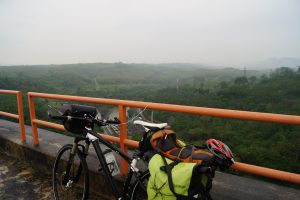 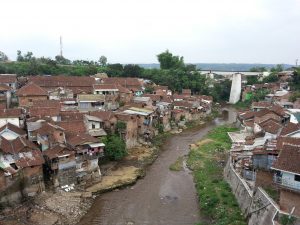 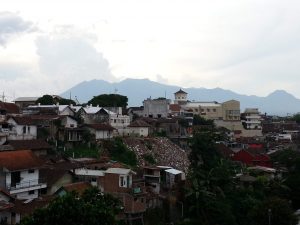 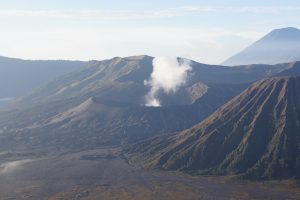 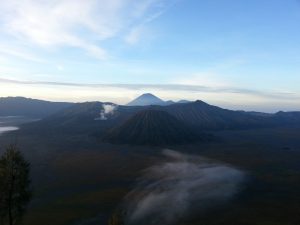 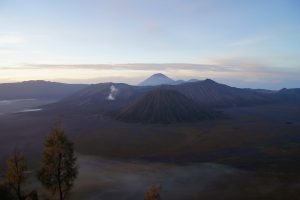 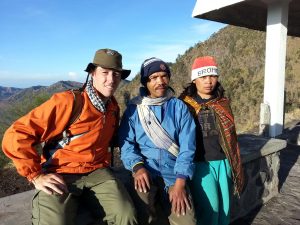 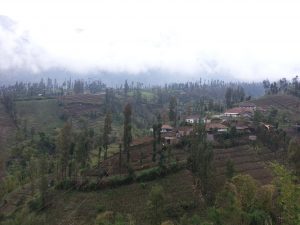 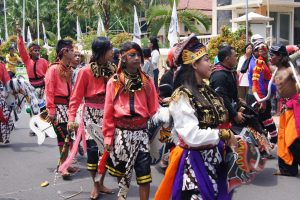 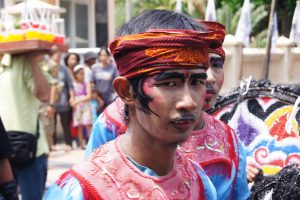 Bromo
The trip to Bromo was pretty amazing. The drive itself was awesome, with kilometre after kilometre of mountainous farms, where people work on amazingly steep fields. Typical to any place that is touristy, I came across a ‘tourist information’ stand where the guys told me the road ahead was closed but that I could stay in a homestay and get a truck down the mountain the next morning. I almost believed them, but then decided to go check it out. Further up the road, I was stopped again by a group of guys touting some homestays and telling me the road is closed. I eventually reached a gate in the road, where two guys ran to me telling me its closed but that I could get a truck down the next day. I told them I already saw people exiting through the gate and just went and  lifted it over my head and drove on.

Apparently it was ‘closed’ because it had yet to be blessed by the local religious leaders. It was an amazingly steep switchback all the way down to the Sand Sea on the inside of the caldera (really big former volcano). Driving across the sea was a challenge and just as I was about to reach the road up to the town on the other side, I met a German dude named Christian that was walking to Mt. Bromo, so I decided to join him and check it out right away. What a sight! As you walk up the steps, you begin to smell the sulphuric acid in the air. When you reach the rim of the volcano, the guardrail is all in disrepair, and as you look down all you see is smoke billowing in the bowels of the earth. Absolutely amazing! To think that this volcano is active and regularly erupts is a little bit scary. In 2004 it erupted and killed two tourists standing on the rim. And a month before I was there it belched out some lava rocks. It’s really not somewhere you want to spend too much time standing. Christian and I doubled on my bike across the sand sea and got to the hotel just as the rain was arriving. That night I met Tony, a French guy doing pretty much the same trip as me, but on a Vespa.Tony and I decided to drive up the start of the hiking portion the next morning to catch the sunrise over Bromo and Semeru. Semeru is the  highest volcano in Java, standing at 3600m. I think the sunrise was over-rated, but still worth getting out of bed for. After getting some breakfast Tony and I took our motorbikes across the sand sea and just cruised around for a couple hours, climbing the other side of the caldera trying to get to some mountainous lakes close to Semeru. We never made it there because Tony’s vespa has some mechanical problems. Good times nonetheless. I might be seeing Tony again in the Gili Islands around new years.

The drive back to Malang was absolutely miserable as it rained the  entire way, and even though I had a rain jacket, it did little to keep my lower half warm and dry. Needless to say I got sick, and it made  cycling to Bali a real pain.

To read about riding through Eastern Java and Bali, click Part 4