I decided to go to Surakarta (Solo) for my 1st bike leg. Only 68km away on a flat road. About 2.5 hours of boring riding on a busy road. I had three couchsurfers lined up for Solo, but since I delayed my departure from Jogja, the two locals could no longer host me. The third was a French guy that had to work until 9pm, so I decided to get a hotel the first night. All the cheap ones were really nasty, so I decided to spend big money ($8.50) and get one that was decent’ish. Since I got up that morning at 4:30am to go to Borobudur Temple, I was pretty beat, so I got some pizza and crashed. The next morning I went to Phil’s place. It’s a small place, with one room and a little squat toilet bathroom. He only pays $40/month. He was an awesome host. Since he works close by his place, he decided to take his bike and leave me his 225cc Yamaha. What a day, just cruised around town, and read a book.That night Phil and I went to meet up with one of the two CSers, had some beer and chilled out. The next morning, we went out sightseeing before he had to go to work, and ate some amazing bbq chicken. I didn’t do much in Solo, but did have a nice time relaxing, talking to Phil and cruising around on his motorbike. 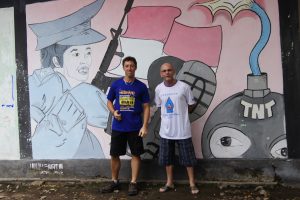 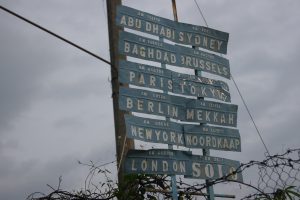 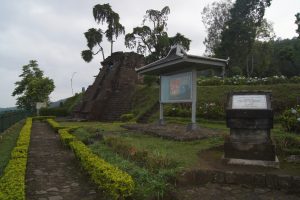 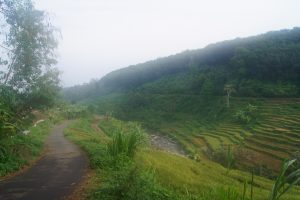 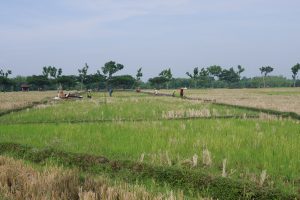 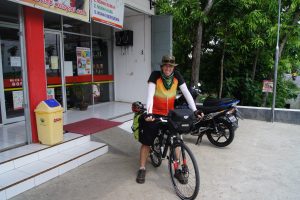 After two days in Solo I decided it was time to keep heading East. I heard there was a nice temple up the side of the nearby mountain, Gunung Lawu. Everyone I talked to said it’s very high up in the mountain and that I shouldn’t go there by bike…..challenge accepted!Although only 50km away, the final 30km are all uphill. The first 20km were easy, with me being able to ride consistently at around 20km/h. Then I saw the signs for steep incline. They were insane. My speed dropped to about 12km/h, then, as it got steeper, to about 7km/h. Every time I passed a local they just looked at me and laughed when I said where I was going. That’s right, it was so slow I had time to converse with them before going out of earshot. I finally I took a break for something to eat, and the locals told me it was only 2km away, but that it was so steep there was no way I could ride up it. I’d like to think that if I wasn’t carrying 20kg of luggage on my bike that I could have done it, but I don’t know. I mostly walked, awkwardly pushing my bike. Luckily a truck came by in the last 1km and I put my bike in the back and he drove me up. This was my first even big climb on a bike loaded with weight.My plan was to sleep in a hammock when not in a city, so I set-up camp in the jungle. It was definitely a lot different that a Canadian forest from back in my army days. There were so many more sounds, weird animals, monkeys, etc. Kinda freaky. I woke up in time for sunrise, but the temple wasn’t gong to open till 9am, so I decided not to wait and got going for my next destination. I could see the temple from outside and it didn’t seem all that interesting.

After the previous days near 5 hour ride for 50km I was excited for a relaxing ride down the mountain. However, this wasn’t going to be an easy day. I knew by looking at my gps that I would be riding around 200km to reach Kediri.I had initially checked my GPS and asked locals how to get to Kediri, and was told that the ‘quickest’ route was to go over Gunung Lawu (Mount Lawu). However, that would entail another 15-20km of steep uphill through winding roads. I decided to go down and around the volcano instead. One of the benefit of riding in Indonesia is that unlike with normal mountain ranges, volcanoes are generally spread-out and can be circumnavigated.The ride down the mountain went by so fast, and with a little direction from locals, I was able to go through the tea plantations, which were absolutely amazing to see in the early morning. If not for having disc-brakes I might have died, as I approached speeds of 70km/h with the brakes on. The damn things were smoking and smelled like burned break-pads. Now they are warped again, and will probably need to be replaced after this trip. Oh well. Time for an upgrade.After about 40km, I got on the ‘highway’ for the next 157km. Being relatively more tired after the previous days climb up Gunung Lawu, I was only averaging 24km/h. While taking a break at a rest-stop later in the morning I ran into my mountain climbing buddy Yelle, from Holland. He was taking a bus to Surabaya, so we chilled out and talked about the last few days. Eventually it was time to conquer the last 100km.I was getting tired of going up the long slow inclines, so I began to time the climbs to with those of the slow moving double-transports to come by. I would then grab on and let them tow me up the hill. It worked relatively well, but not all the drivers were happy I was doing that, since it was dangerous for them….as it put them further away from the shoulder and closer to oncoming traffic. I would also ride right behind the transports, eliminating air-resistance. However, this was significantly more dangerous, since any type of hard breaking could result in me crashing into the back of the truck.Either way, I made it to Kediri about 30 minutes after sundown. That made it an 11 hour day on the bike, with 7 hours 45 minutes in the saddle….covering 187km. My previous record was a 170km race done in 4 hours 45 minutes. This was considerably slower, but considering the baggage and that I was riding a mountain bike….not too shabby.

To read about Malang and Mt. Bromo, click Part 3