This post is copied over from an old site I was building. This trip took place in 2012 during the winter break from my teaching job in Malaysia. I decided to load up a mountain bike with a rack and panniers and some slicker touring tires and ride from Central Java to Labuan, Indonesia. This was my first every bike tour. In total, the tour was about 1500km of riding, which isn’t very much when spread out over 7 weeks. I really took the time to get to know the places I stayed and meet lots of locals.

So far, I haven’t left Yogyakarta (Jogja). Here’s why.The thing I like most about Couchsurfing is the impact that random encounters can have on someone’s life. On my second night in Jogja, on the advice of a couchsurfing contact, I attended a CS meetup up the road from where I was staying. While there I was invited to three events by the local CS people:1. Trip to Borobudur Temple the next morning at 10am.2. Karaoke the next night3. 2-day hiking trip up Mount Merbabu.Number 1 fell through because they randomly decided to go extra early, and didn’t bother calling me, so I spent the day wandering about Jogja and just getting to know the city and its atmosphere. Letting it all sink in.The next event, karaoke night, is never bad, and I had a blast with Alya (my CS contact) and others from the previous night rocking it out at Happy Puppy Karaoke.The hike up Mt. Merbabu was really amazing, but quite poorly planned. My  ‘Western’ mind thought we should have been there early to hike up the mountain, set-up camp, cook a nice dinner, and get some rest. ALL BEFORE THE REALLY EARLY 2AM START TO CATCH THE SUNRISE!Indonesian’s don’t think the same way. My ride picked me up at 9am so we could reach the rendevous by 10am. Everyone was late….we left at 11:30am. By the time we arrived at the base-camp and were ready to go it was 3pm. By 4pm it was pouring rain (we’re hiking in monsoon season). Given I didn’t bring enough warm clothes, as I’m doing a bike trip, I had to buy a rain jacket and rain pants. Generally, I was freezing cold most of the time. I didn’t feel so bad since half the people in our group were wearing sandals. and its not exactly a small mountain. It’s 3142 meters high. Hell, one girl didn’t even bring a sleeping bag. She slept wrapped in a sarong and a garbage bag. By 4:30pm I took over carrying the heaviest bag, as the leader of the expedition was busy with the weaker people at the back. It was close to 25kg. By 7pm, one girl was so exhausted she passed-out in the middle of the path. We decided this was a good time to set-up camp. We set-up a tent and the near hypothermic girl was wrapped in blankets with two other girls. At this point I was started to doubt the intelligence of joining this doomed expedition, fully expecting that by the time we made it back down the mountain someone will have died.We got up at midnight to get going for the summit. Leaving out tents and non-essentials behind made it was much easier. Luckily it was no longer raining, but since it was pitch black and 1/2 the people didn’t have a light with them, it was still a pain in the ass. We reached the summit about 10 minutes before sunrise. Damn close call. Needless to say, it was one of the most amazing sunrises I’ve seen. 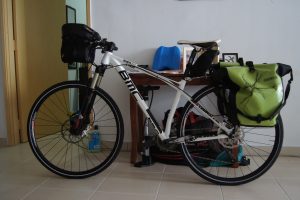 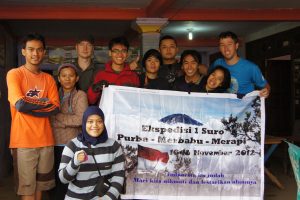 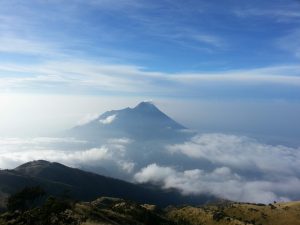 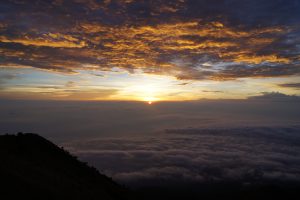 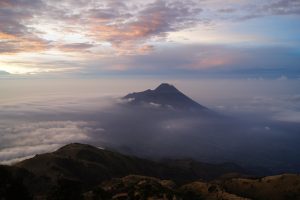 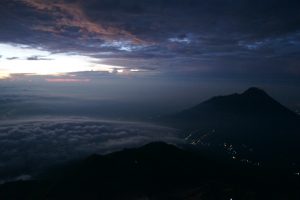 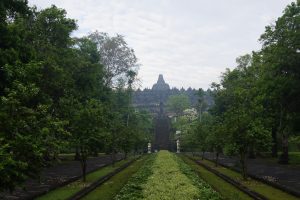 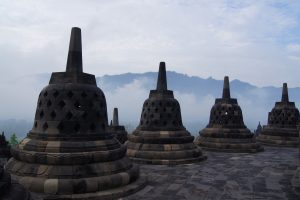 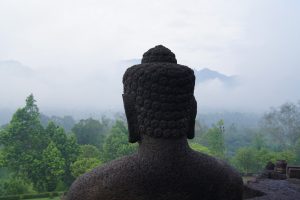 Some of them were going to do one more day and hike up Mt. Merapi, which is an active volcano that is always smoking. I decided that I had had enough mountain climbing drama and would head back to Jogja, get some rest, a massage, and spend more time in the city. My last day in the city, I went to Borobudur by motorbike. It’s a 9th century Buddhist temple that shows the influence the Hindus had in Indonesia before Islam came. It’s the worlds largest Buddhist Temple and a UNESCO World Heritage Site. As soon as I got back from Borobudur, my bike trip was going to start as I was heading for Solo.

To read about riding through Central Java, click Part 2